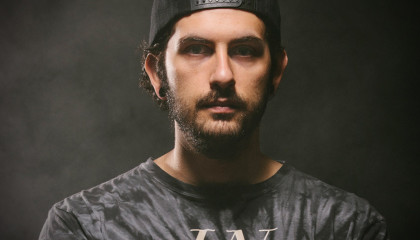 Surprises couldn’t be missing in this episode either: an interview with Flux Pavilion, a name that does not need introductions, and a Bishu guest mix.

I met Flux Pavilion during his show at the Insomniac Countdown on NYE in Los Angeles. Insomniac, one of the biggest organizations of EDM / Bass events in the US,  organizer of EDC and Nocturnal Wonderland too, did not disappoint this time either! The Countdown, with an audience that exceeded 10,000 participants, three stages, more than 30 artists, was State-A unique show and unparalleled.

Among my favorites sets were those of Yellow Claw, Alison Wonderland , Dj Snake , Delta Heavy, Megalodon B2B Truth and obviously Flux Pavilion himself.

You can check some videos on my instagram @rossellablinded

In this Episode, as i anticipated, we also hosted an exclusive guest mix by Bishu, a young producer from Cove, US that recently released for Mad Decent and Unborn, Tom Size’s label. You can read the interview with him below.

To finish off the episode, I made a mix with some of the latest releases from the American Bass world, including the preview of the new NGTMRE’s EP! Find the podcast and the tracklist below!

1. You are one of the youngest producers that have released for Mad Decent, how did you start producing and how did the collaboration with this big label start?

Hey ! I began producing 4-5 years ago after hearing Deadmau5’s/Skrillex’s stuff. I thought it was super dope how Skrillex was making these insane songs just on his laptop in hotel rooms whilst travelling around the world. Blew my mind and I had to give it producing a try ! The colaboration with MD happened extremely organically… I released a few songs with UNBORN and like a few months later their Mad Decent A&R emailed me asking if I had any unreleased music. Around 6 months later I signed a contract with them.

2. How did the collaboration with Unborn Records, Tom Size’s label, start?

When I first started producing and releasing trappy-type-stuff Tomsize was one of the first to take notice and support me. He commented on one of my songs and like a few weeks later he started UNBORN (which blew up super quick!). I liked the look of the label so I emailed a demo and they were down to release it. I distinctly remember that I was super hungover the day they emailed me. Was cool to wake up to.

3. Lol i can imagine that! Can you reveal us your future collaborations?

A few colaborations are up in the air at the moment, nothing super solid. So I guess I don’t really have anything to reveal (yet!) haha.

Do you always work in a professional recording studio or do you also produce at home or in the hotel rooms with a laptop and headphones?

Definitely not working in a professional studio. I use my macbook and studio monitors to produce. At night I typically move to my bed and use headphones- I like checking my songs on both headphones and monitors !

I have dj’d a few house parties, but nothing major. Definitely going to be djing for real soon.

6. What are the main things you’d say you’ve learned being in the game over the years?

Main things I’ve learned… hmm. I think it would be the fact that there are 2 sides to this whole music thing. There’s the art and creative side, and then there is the business/branding/connections side. Each are critical to success in my opinion. Getting a (competent) manager really helped me understand a lot of the business stuff. Not sure if this has much to do with ‘the game’ really, but it’s probably one of the main things I’ve learned haha

8. What is your advice / your tips for young dj/producers that want to start a career in the Bass music scene?

I’ve just barelyyy found my footing in the scene (carreer-wise), but I think some things are critical to getting key people interested in what you’re doing. Number one would be to have something that is slightly different, but still appealing. It’s like the ultimate ratio of being good- different appealing. The more different and more appealing your stuff is the more people will be interested. This is super basic, borderline cliche stuff though ahah

9. What are your future projects? And.. Are you going to play in Europe? We can’t wait to welcome you!

Future projects include some collaborations, more releases (obviously), and getting the dj/live side of things solid. I’d be way down to play in Europe ! Hopefully soon haha.

3. Drake & Future / Live From The Gutter

Justin Bieber / What Do You Mean (Alison Wonderlan Remix)